Wounds can be classified according to:

Abrasions – the most common form of the wounds are abrasions of various etiologies associated most often with little loss of the epidermis. Sometimes, however, there is also the loss of the dermis and subcutaneous tissues.

Bite wounds / lacerations – usually arise as a result of being bitten or mechanical factors, e.g. when incarcerating or grasping the limb in “traps” (e.g. wells, sewer grates, etc.). During the attempt to release, often in panic, limbs suffer from breaking the continuity of the skin, muscles and sometimes torn tissues. The bite wounds are regarded as highly polluted- both mechanically and bacterially.

Torn wounds – usually arise as a result of strong mechanical trauma (e.g. traffic accidents). They are serious deep tissue damage often with detachment of tissues. In the case of this type of injuries, the skeletal elements are often revealed (e.g. often, limb joints). These are heavily contaminated wounds.

Incisions – Common, of different etiology. The incisions are accompanied by a break in the skin ( its individual layers or totally). These wounds often penetrate to the deeper layers of tissue (muscle) and sometimes the skeletal elements. Such wounds often involve injury of the blood vessels, tendons, nerves.

Gunshot wounds – can sometimes be considered a form of puncture wounds. These types of injuries can be most often met among the hunting dogs. 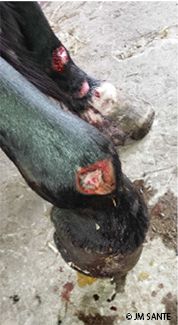 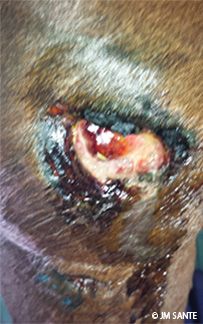 Burns – these types of injuries can occur as a result of thermal, chemical, electrical burns and occasionally due to radiotherapy. There are three degrees of burn wounds:

First degree burns – superficial, characterized by skin redness and slight swelling. It is characteristic that this degree is accompanied by severe pain.

Second degree burns – burns penetrating to the dermis. The skin area forms blisters. This is accompanied by severe pain. Depending on the degree of penetration time, degree IIA and IIB are distinguished.

Third degree burns – burns, penetrating deep into the layers of the subcutaneous tissue including muscles. Black scab appears on the surface of the skin, may occur charring of the skin and sometimes muscles. Not so painful, but tissue damage is very serious, often irreversible (necrosis).

Pressure ulcers are separate wound category. They appear as a result of continuous and long term mechanical stress on the soft tissues. This leads to impaired circulation and cellular metabolism. In animals, pressure ulcers occur most frequently in the vicinity of tubercle of iliac crest, ischial tuberosity, acromion of scapula, the lateral surface of the tibia (lateral condyle), sternum, olecranon and the calcaneal tuberosity. There are various classifications of the degree of development of pressure ulcers, depending on the observed changes, i.e. from minor ulcers characterized by a slight reddening area, no fading under the pressure (during the test), up to major characterized by irreversible changes in the tissues in the form of necrosis of the muscle fascia, and even joint, and bones.

WOUNDS ARE ALSO DIVIDED DUE TO:

the degree of mechanical and / or bacterial contamination.

IN THE CASE OF ANIMALS:

A special role in the pollution of wounds is played by bacteria (commensal or pathogenic, introduced from outside) colonizing the surface of the wound and leading to the formation of the so-called Bacterial Biofilm – which is the main obstacle to proper wound healing.

Bacterial Biofilm within the wound has the form of connected bacterial microcolony (these may be various kinds of pathogenic bacteria) forming a multilayer structure surrounded by the so-called three-dimensional extra-cellular matrix composed of a polymer (EPS – extracellular polysaccharide), mainly polysaccharides (including proteins, fats, cellular elements and bacteria).

The biofilm creates favorable conditions for the continuous proliferation of already settled bacteria and colonization and the development of new bacteria or other pathogens. Thus it hinders or delays the healing of wounds. Bacteria in colonies of biofilm “cooperate” with each other releasing substances that induce the specific behavior of cells, e.g.sustaining growth and biofilm structure and regulating physiological functions like production of virulence factors while continuing to produce inflammatory mediators and release toxic products of metabolism to the wound.

In addition, they block access of oxygen and nutrients to the host cells. Colonized within the biofilm bacteria undergo a series of phenotypic and molecular changes intensifying their resistance to environmental factors.

Biofilm is firmly and strongly bonded to the substrate – removing it from the wound surface with normal washing (water, soapy water, physiological saline) is not possible.

Biofilm formation has a number of stages: 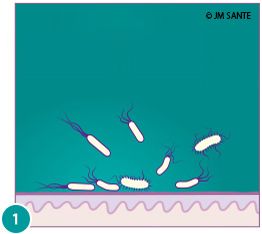 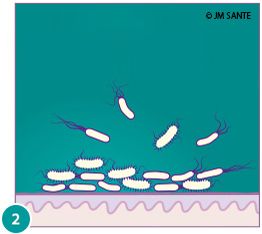 Permanent and irreversible combination of bacteria with the substrate and the beginning of proliferation (seconds – minutes after injury). 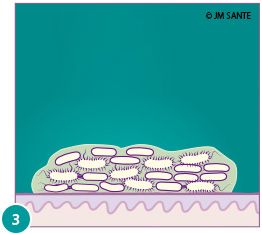 The superior growth of bacteria and production of EPS.
The formation of the Biofilm matrix
(A couple of hours-days after injury). 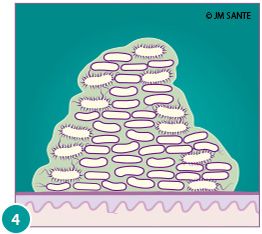 The creation of three-dimensional structure of the biofilm
(A couple of hours-days after injury). 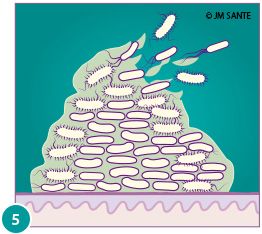 BIOFILM IS A SIGNIFICANT OBSTACLE
IN WOUND HEALING

(exudative, preceded by a short-term hemostasis)

Infectious microorganisms, remains of foreign matter (e.g.,. mechanical impurities) or necrotic tissue are removed from a wound in the inflammatory phase. The wound is covered with a scab, which protects it from adverse external factors including bacteria. The main cellular factors involved in this phase include platelets (hemostasis), neutrophils and macrophages. The inflammatoryphaselasts from 1 to 5 days.

Inflammatory processes in the wound are inhibited in proliferative phase and the process of filling the defects with granulation tissue and angiogenesis begins. The proliferative phase takes from 5 to 21 days. Mainly the fibroblasts, lymphocytes, endothelial cells, and keratinocytes are involved in this phase.

The final stage, maturation, includes the reorganization of the structures of scar tissue formed in the second phase, i.e. the reduction and greater flexibility of the scar. This process can take from 3 weeks up to 2 years. Fibroplasts play special role in this process.

Very often, however, the healing process is disturbed by a number of external and internal factors such as deficiencies in the inflammatory response within the wound, delays of angiogenesis or granulation resulting from, for example, cardiovascular disorders, metabolic diseases, neuropathy or malnutrition. Heavily, mechanically or microbiologically contaminated wound bed is an important external factor affecting healing disorders. A special role is attributed to the bacterial biofilm emerging in the wound.

Given the number of problems associated with normal wound healing, and based on their experience, the specialists of EWMA (European Wound Management Association) proposed in 2003, a unified procedure of handling wounds, described as the T I M E.

Abbreviation T I M E is an acronym from the first letters of the English names for the various processes and changes (mainly pathological ones) occurring in wounds and specifying the procedure for the various stages of wound healing.

Each point of the TIME acronym corresponds to EWMA guidelines for proper conduct in the process of wound healing at different stages:

T I M E is a dynamic scheme, subject to constant modifications resulting from both medical knowledge and experience gained by doctors. For example, revealing the specific role for the bacterial biofilm manifested in healing delay or healing disorder forced supplementing the scheme with the methods effectively preventing the formation of biofilm in the wound or controlling the biofilm already formed. Therefore, methods to combat bacterial biofilm – BBWC (Biofilm-Based Woun Care/Management) were developed. One of such efficient methods (which was part of section T of T I M E) includes lavaseptics i.e. the irrigation of wounds with special formulations effectively removing and fighting with bacterial biofilm, as well as cleansing wounds from any other biological and / or mechanical contaminants.

This site uses cookies to provide services at the highest level. Further use of the site means that you agree to use them.Zamknij